40% of marketers agree that social media marketing has become more difficult in the last 12 months, according to a report by Social Media Examiner. As one of the fastest changing industries in the world, it can be difficult to keep up with the constant shifts and trends. Here are the top few that experts determine will dominate social sphere this year.

1. The fight for authenticity

For the millennial generation in particular, social media is becoming the main source of news. In recent months, there has been a spike in ‘fake news’ published intentionally by sites who want to attract attention.  In fact, evidence shows that people in the US engaged more with fake news around the presidential election than real news.

Tim Cook, chief executive of Apple, has urged the government and tech companies to crack down on fake news, which he says is ‘killing people’s minds’. Facebook is already tackling the issue by weeding out and banning such websites from advertising on their site.

In a statement, they explain that ‘authentic communication’ will remain a priority on news feeds and aim to prevent content that is ‘misleading, sensational or spammy.’ Germany are going one step further: they are contemplating implementing legislation to fine sites that fail to monitor fake news.

According to Facebook, engagement rates are 10 times higher with live videos than any other medium. Video content is more appealing to users because it’s a more basic form of interaction. Interacting with visual content through comments and threads is easier.

Live TV streaming of things like sporting events and music gigs have proven popular with viewers for years, and now it’s gaining traction on a user level on social media platforms.

This was already a thing in 2016 and is set to take over this year -  43% of marketers plan to use it compared to 14% last year, according to Social Media Examiner.

At present, Facebook Live and Periscope are the most popular platforms for live video- live streaming on Facebook hit a record high on NYE 2016 as millions of users shared their celebrations as the clock struck midnight. Instagram, Twitter and YouTube have also jumped on the trend and have developed their own versions.

What is live streaming?

Video streaming allows the viewer to watch content in real time, as opposed to having to download the file beforehand. You (obviously) can’t edit a live stream either, so you need to make sure you get it right! Live streaming is a way of bringing exclusive snippets of content to your audience- things that they wouldn’t get their hands on elsewhere.

How can you use it?

First off, you need to decide which platform your audience engages with most. This can be discerned quickly through the use of analytics pages.

Here are a few ideas to get you started…

You can use it to stream interviews, seminars and Q & As to viewers who cannot physically attend an event- this way, viewers get to interact in real time

Live streaming needn’t just be about selling. Take companies like Buzzfeed and Lad Bible, for instance, who make money through advertising and use content to attract attention.

The latter used live streaming last summer to determine which ice lolly could would take longest to melt and it went viral, gaining over 6 million views… 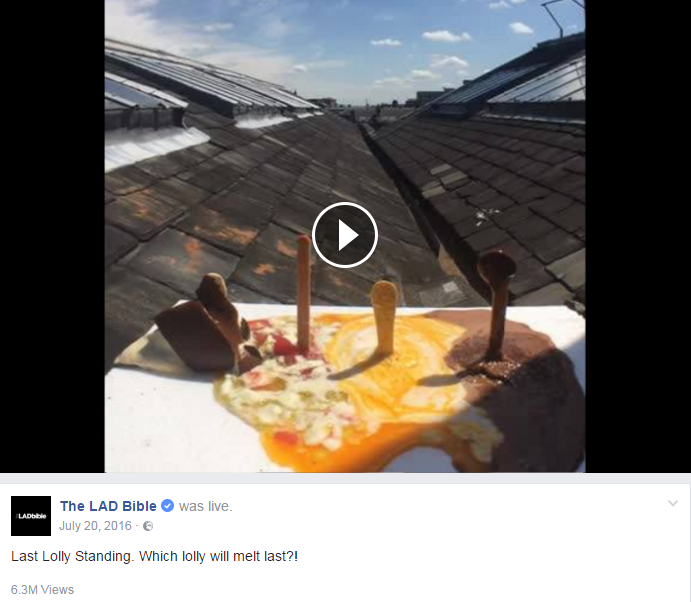 Many businesses are starting to utilise the 1:1 communication methods that millennials prefer. On Facebook, for example, you can click on a brand’s ad and it’ll direct you to a chat window.

The challenge for business, it seems, is engaging customers through messaging without being invasive and annoying. Expect to see some innovative methods being tested this year.

As access to VR technology increases and becomes less expensive, it makes sense that consumer demand for this type of content will increase.

Lots of big brands have already experimented with VR in their advertising. Take the New York Times, for instance, who have been dabbling in VR content making for over a year.

As far back as 2015, they sent their subscribers a free Google cardboard VR headset with a link to its film Displaced, which won two awards at Cannes Lions Festival the following year.

Jaguar's Wimbledon campaign won the Steve Wozniak Award for Tech Excellence at last year’s Masters of Marketing 2016. It allowed tennis fans to get a taste of centre court, transporting the viewer into the shoes of Andy Murray!

Have you experimented with any of the above social media trends?