Despite being made redundant in the midst of the economic crash in 2009, Sarah Brockwell started her own business three years later with only £250 and what she thought was just a pipe dream to her name.

Shockingly, but perhaps not surprisingly, only 17% of new businesses in the first quarter of 2017 were founded by women, according to global data collated by TechCruch. This figure hasn’t budged for the past five years.

Why has progress plateaued?

Funding, it seems. Female founded companies fare worse than their male counterparts at every stage of the funding process, from angel seed through to late stage. But why? There are contextual factors that can explain the issue to an extent; for example, female-led businesses tend to be in slower-growth industries like food and fashion. But surely that’s not the only reason.

“Every year that goes by where we continue to fund the exact same pool of overwhelmingly male, overwhelmingly white founders is one where we are missing out on the opportunities to find important new innovations.” - Ethan Mollick

Some say the imbalance stems from inherent social behaviours, namely the homophily, or ‘love of the same’ principle: most VCs are men so will instinctively gravitate towards male-led projects. This stifles progress, according to Ethan Mollick, Professor of Management at Wharton in Pennsylvania, who explains,  “Every year that goes by where we continue to fund the exact same pool of overwhelmingly male, overwhelmingly white founders is one where we are missing out on the opportunities to find important new innovations.” 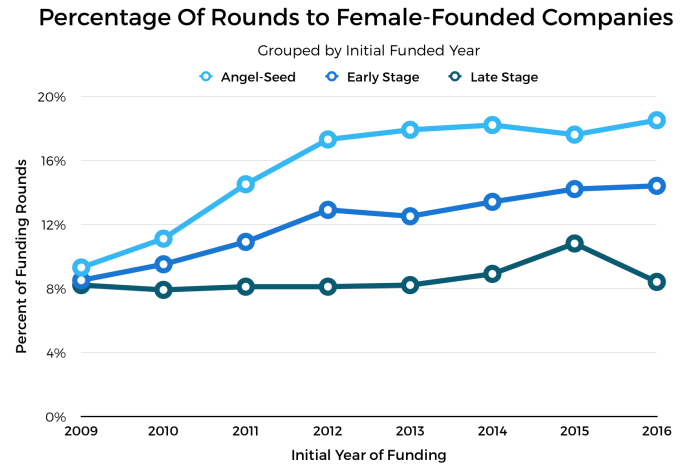 Figures show that in 2016, companies with 1+ female founder raised 19% of all seed rounds, 14% of early-stage venture and 8% of late-stage venture rounds.

What does it take to succeed as a female founder?

In 2009 - whilst on maternity leave - Sarah Brockwell was made redundant from her position as a Marketing Director. Sarah wanted to continue with her career, not least of all because she had a young family to provide for. Having been in employment without a break since the age of 18, she had always dreamt of starting her own marketing company, but hadn’t the guts to until 2012, when, inspired by fellow Essex resident Lord Alan Sugar, she took the plunge.

Sarah’s dream was to start a marketing and PR business for SMEs and startups in Essex. But where do you find the money to start a business in cash-strapped times?

“If you can launch a small business in an economic downturn - and survive - think what you can achieve in better times.”

Well, a bit of initiative is all you need, apparently. “I had a start-up budget of just £250, which I made by selling my unwanted maternity clothes on eBay,” Sarah explains. “I wrote my own business plan, went to government funded self-employment seminars like Business Link, and carried out extensive market research.“

“It was hard work – I ended up working a lot of late nights, but by June 2010 I had all the tools I needed, including my own website and logo, so I invested my £250 in printing business cards and leaflets.”

Today, sarahBee marketing has a regular client base of 20+ Essex based businesses, and offers affordable, no-nonsense PR and marketing to SMEs and startups. The company has won six awards, including Best New Company, Best Business to Business and Businesswoman of the Year.

On a Business Link seminar in April 2010, Sarah Brockwell was told: “If you can launch a small business in an economic downturn - and survive - think what you can achieve in better times”.

This has been true for Sarah’s marketing business.

“Because of the recession, most SMEs no longer have the budget to employ a full time marketing staff member – and this is where the sarahBee marketing business model achieves great success. So what is a hurdle for other businesses is bread and butter for sarahBee marketing.”

I caught up with Sarah this week to learn more about her experience as a female business leader.

Why do you think there’s still such a gender imbalance when it comes to starting a business?

S: Simply that men are braver!  Since I founded my company in 2010, I've worked with over 900 entrepreneurs and yes, the majority are men. Of these men, you tend to get young entrepreneurs (under 30) and then late middle age (50+).  I'm generalising a lot and the Office of National Statistics has the exact breakdown but, unfortunately female entrepreneurs are rare. It could be that some women take a career break to raise a family for a few years.  During this time they lose their confidence as they feel their skills have become rusty. This is simply not the case. Women make fantastic innovators and some of our most successful clients are female entrepreneurs like Chocolate Buddha and The Cheeky Panda.

What were the main hurdles you had to overcome when starting out?

S: The year I started up, I had been made redundant whilst on maternity. I had a newborn baby.  I had just got married for the second time and turned 40 - just about as much as life can throw at you in one go!!

Budget is the obvious answer but in the new gig-economy this is easy to overcome. I am passionate about business and every day is a new adventure. I don't stop at hurdles, I work around, or over them.

When I first started work I was told "as a woman you will need to work harder and better than men". I never forgot that.

Have you ever experienced sexism in the workplace or in business, and how did you deal with it?

S: Oh yes, I am an ex-City Banker and gave as good as I got. When I first started work I was told "as a woman you will need to work harder and better than men". I never forgot that. Sexism can sometimes work in your favour too!  We have a female client that developed a ground-breaking suspender belt with a rocket scientist - she used all her feminine guile to her advantage.

What advice would you give to female entrepreneurs who are looking for investment?

S: Engage with your local enterprise support providers. You can access these via your LEPs - local enterprise partnerships and enterprise zone.  Experts will point you in the right direction for funding (primarily ERDF money). You could also try venture capital, angel investors and don't forget crowdfunding.

Finally, if you want to start your own business YOU need to make it happen. Nothing will drop into your lap. It’s hard work but the benefits speak for themselves.

How are women in startups helping to close the gender gap?