The festive season is upon us. At this point in the year we’re anticipating our respective Christmas celebrations and pondering over menus and outfits. For some it’s a nice opportunity to socialise with colleagues outside the office; for others it’s the annual precursor to the ultimate morning after doom*.

According to a poll by the CIPD, 10% of UK workers know someone who has been disciplined or dismissed for ‘inappropriate Christmas party behaviour’.

Survive your work Xmas party shenanigans this year and fiercely protect your dignity by following these essential do’s and don’ts!

This is the perfect time to build a rapport with the colleagues you don’t know that well yet. Get your social hat on and get to know people. This’ll make it easier to talk to them in work; you never know, opportunities for collaboration might arise.

2. Make the most of the free food

In this day and age, every penny counts, especially if you live in an expensive city like London. So if you’ve been living off Tesco Value baked beans all year in an attempt to save for a mortgage in 2050, now’s the time to gorge yourself, 100% guilt-free.

Before the party, before it’s too late.

4. Maintain a level of professionalism

Bear in mind who you’re speaking to.

This might sound a bit rude, but it’s actually in your best interests- trust me. Firstly, it takes ages to say goodbye to everyone. Secondly, if you only forget to say farewell to Jane in facilities, you know she’ll hold it against you in January and you won’t get those inky roller pens you’re after.

Thirdly, someone’s bound to make you stay at the party and you’ll fall into the trap of don’ts...

In fact it might be a good idea to turn off your phone prior, to limit the risk of posting dodgy photos and having to desperately delete them at 6am as sobriety dawns (yes, we’ve all been there). Spend your time actually speaking to people instead. Also, no one outside of your company actually cares, they’re at their own Xmas do!

2. Harp on about work all. night. long

True, work is the the main thing you all have in common, but it’s surely not the only thing! Use the party as an opportunity to bond over shared interests and experiences, don’t bore people with next year’s financial predictions. Steer clear of gossip too. It’ll only lead to tears and ruined Christmases.

3. Make the most of the free booze

For those of you who are tempted to go all out on this one, please, for the sake of your modesty, refrain. There’s nothing wrong with indulging in a few bevvies over the course of the night, but throwing up in the middle of the dancefloor is not a good look. Neither is having to pay a hefty fine in the taxi back!

4. Go near the office letch

Similarly, don’t BE the office letch. No one likes a letch. 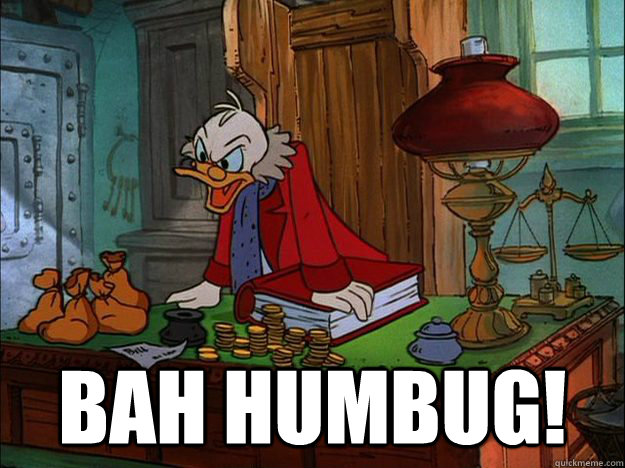 Resist the temptation to moan like the miserable old miser of fiction. Let bygones be bygones and have fun! The same goes if you’re the boss: if you book the party early/ midweek, be sympathetic towards sore heads the next day.

Make sure it’s the party your colleagues are chatting about on Monday, not you! Socialise, stay cool and avoid doom.

And most important of all... enjoy!